Today, Comcast launched an upgrade to its existing Plume-based Wi-Fi mesh offerings, the X-Fi Pods. The new, tri-band X-Fi Pods appear to be direct implementations of Plume’s Superpod design—which is good news for Comcast customers, since the Superpods still sit comfortably at the top of our Wi-Fi mesh performance charts.

The new tri-band X-Fi Pods are available today at $119 for one or $199 for two, and they integrate with X-Fi customers’ existing $25/mo X-Fi managed Wi-Fi.

Why does tri-band matter? 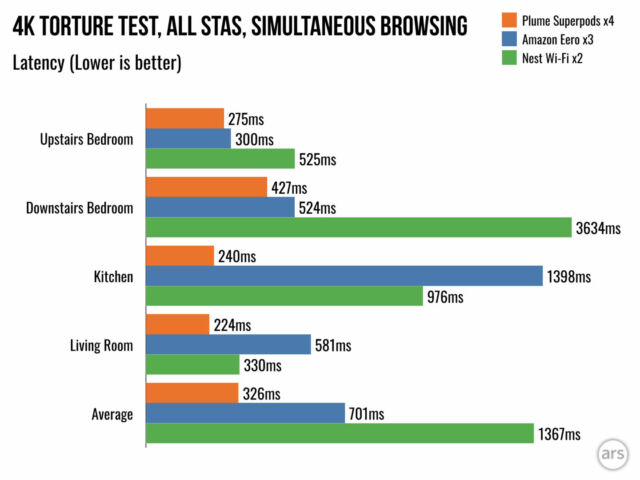 In this December 2019 test, Plume Superpods ruled the roost, in part due to their tri-band design. (credit: Jim Salter)

One important distinguishing characteristic between Wi-Fi mesh kits is the number of radios in each node. The highest-performance mesh kits—such as Netgear Orbi RBK53, Plume Superpods, or the new X-Fi Pods announced today—have three radios in them, not just two. The extra radio allows the mesh nodes to simultaneously communicate both to the client devices connected to them and the “backhaul” (their connection upstream to the router) on 5GHz radios.