A New Mexico man is facing federal hacking charges for allegedly using the now defunct attack-for-hire service vDOS to launch damaging digital assaults aimed at knocking his former employer’s Web site offline. Prosecutors were able to bring the case in part because vDOS got massively hacked last year, and its customer database of payments and targets leaked to this author and to the FBI.

Prosecutors in Minnesota have charged John Kelsey Gammell, 46, with using vDOS and other online attack services to hurl a year’s worth of attack traffic at the Web sites associated with Washburn Computer Group, a Minnesota-based company where Gammell used to work. 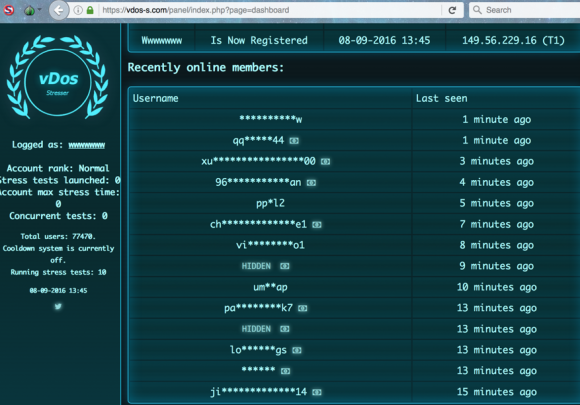 vDOS existed for nearly four years, and was known as one of the most powerful and effective pay-to-play tools for launching distributed denial-of-service (DDoS) attacks. The vDOS owners used a variety of methods to power their service, including at least one massive botnet consisting of tens of thousands of hacking Internet of Things (IoT) devices, such compromised Internet routers and security cameras. vDOS also was used in numerous DDoS attacks against this site.

Investigators allege that although Gammell used various methods to hide his identity, email addresses traced back to him were found in the hacked user and target databases from vDOS.

More importantly, prosecutors say, someone began taunting Washburn via Yahoo and Gmail messages while the attacks were underway, asking how everything was going at the company and whether the IT department needed any help.

“Also attached to this second email was an image of a mouse laughing,” the Justice Department indictment (PDF) alleges. “Grand jury subpoenas for subscriber information were subsequently served on Google…and Yahoo. Analysis of the results showed information connecting both accounts to an individual named John Gammell. Both email addresses were created using the cell phone number 612-205-8609.”

The complaint notes that the government subpoenaed AT&T for subscriber information and traced that back to Gammell as well, but phone number also is currently listed as the recovery number for a Facebook account tied to John K. Gammell.

That Facebook account features numerous references to the hacker collective known as Anonymous. This is notable because according to the government Gammell used two different accounts at vDOS: One named “AnonCunnilingus” and another called “anonrooster.” The email addresses this user supplied when signing up at vDOS ([email protected] and [email protected]) include other addresses quite clearly tied to multiple accounts for John K. Gammell. 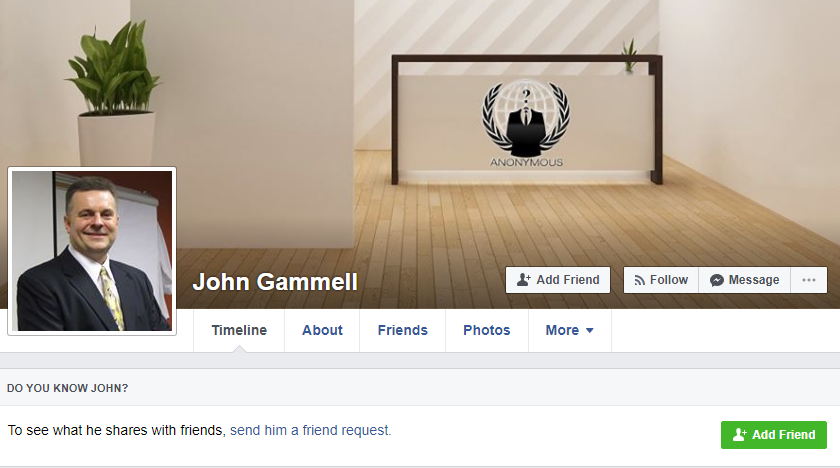 Below is a snippet from a customer service ticket that the AnonCunnilingus account filed in Aug. 2015

“Dear Colleagues, this is Mr. Cunnilingus. You underestimate your capabilities. Contrary to your statement of “Notice!” It appears from our review that you are trying to stress test a DDoS protected host, vDOS stresser is not capable of taking DDoS protected hosts down which means you will not be able to drop this hosting using vDOS stresser…As they do not have my consent to use my internet, after their site being down for two days, they changed their IP and used rackspace DDoS mitigation and must now be removed from cyberspace. Verified by downbyeveryone. We will do much business. Thank you for your outstanding product

We Are Anonymous USA.”

Gammell has pleaded not guilty to the charges. He has not responded to requests for comment. The indictment states that Gammell allegedly attacked at least a half-dozen other companies over a year-long period between mid-2015 and July 2016, including several banks and two other companies at which he either previously worked or with whom he’d interviewed for a job.

In late July 2016, an anonymous security researcher reached out to KrebsOnSecurity to share a copy of the vDOS databases. The databases showed that vDOS made more than $600,000 in just two of the four years it was in operation, helping to launch more than 150,000 DDoS attacks.

Since then, two alleged co-owners of vDOS — two 19-year-old Israeli men —  have been arrested and charged with operating an attack-for-hire service. Aside from Gammell’s case, I am not aware of any other public cases involving the prosecution of people who allegedly used vDOS to conduct attacks.

But that will hopefully change soon, as there are countless clues about the identities of other high-volume vDOS users and their targets. Identifying the perpetrators in those cases should not be difficult because at some point vDOS stopped allowing users to log in to the service using a VPN, meaning many users likely logged into vDOS using an Internet address that can be traced back to them either via a home Internet or wireless account.

According to a review of the vDOS database, both accounts allegedly tied to Gammell were banned by vDOS administrators — either because he shared his vDOS username and password with another person, or because he logged on to the accounts with a VPN. Here’s a copy of a notice vDOS sent to AnonCunnilingus on July 28, 2015:

“Dear AnonCunnilingus , We have recently reviewed your account activity, and determined that you are in violation of vDos’s Terms of Service, It appears from our review that you have shared your account (or accessed vDos stresser from several locations and platforms) which is against our Terms of Services. Please refer to the following logs and terms:\n- AnonCunnilingus logged in using the following IPs: 64.145.76.110 (US), 85.10.210.199 (XX) date: 06-08-2015 18:05\n\n- 8) You are not allowed to access vDos stresser using a VPN/VPS/Proxy/RDP/Server Tunnelling and such.\n- 3) You may not share your account, if you will, your account will be closed without a warning or a refund!”

What’s most likely limiting prosecutors from pursuing more vDOS users is a lack of DDoS victims coming forward. In an advisory issued last month, the FBI urged DDoS victims to report the attacks.

The FBI requests DDoS victims contact their local FBI field office and/or file a complaint with the Internet Crime Complaint Center (IC3), regardless of dollar loss or timing of incident. Field office contacts can be identified at www.fbi.gov/contact-us/field. IC3 complaints should be filed at www.ic3.govwith the following details (if applicable):

How Not to DDoS Your Former Employer