Perhaps the most bustling marketplace on the Internet where people can compare and purchase so-called “booter” and “stresser” subscriptions — attack-for-hire services designed to knock Web sites offline — announced last week that it has permanently banned the sale and advertising of these services.

On Friday, Oct. 28, Jesse LaBrocca — the administrator of the popular English-language hacking forum Hackforums[dot]net — said he was shutting down the “server stress testing” (SST) section of the forum. The move comes amid heightened public scrutiny of the SST industry, which has been linked to several unusually powerful recent attacks and is responsible for the vast majority of denial-of-service (DOS) attacks on the Internet today.

“Unfortunately once again the few ruin it for the many,” LaBrocca wrote under his Hackforums alias “Omniscient.” “I’m personally disappointed that this is the path I have to take in order to protect the community. I loathe having to censor material that could be beneficial to members. But I need to make sure that we continue to exist and given the recent events I think it’s more important that the section be permanently shut down.”

Last month, a record-sized DDoS hit KrebsOnSecurity.com. The attack was launched with the help of Mirai, a malware strain that enslaves poorly security Internet-of-Things (IoT) devices like CCTV cameras and digital video recorders and uses them to launch crippling attacks.

At the end of September, a Hackforums user named “Anna_Senpai” used the forum to announce the release the source code for Mirai. A week ago, someone used Mirai to launch a massive attack on Internet infrastructure firm Dyn, which for the better part of a day lead to sporadic outages for some of the Web’s top destinations, including Twitter, PayPal, Reddit and Netflix.

The Hackforums post that includes links to the Mirai source code.

As I noted in last week’s story Are the Days of Booter Services Numbered?, many booter service owners have been operating under the delusion or rationalization that their services are intended solely for Web site owners to test the ability of their sites to withstand data deluges.

Whatever illusions booter service operators or users may have harbored about their activities should have been dispelled following a talk delivered at the Black Hat security conference in Las Vegas this year. In that speech, FBI Agent Elliott Peterson issued an unambiguous warning that the agency was prepared to investigate and help prosecute people engaged in selling and buying from booter services.

But it wasn’t until this month’s attack on Dyn that LaBrocca warned the Hackforums community he may have to shut down the SST section.

“I can’t image this attention is going to be a good thing,” Omni said in an October 26, 2016 thread titled “Bad things.” “Already a Senator is calling for a hearing on the Internet of Things [link added]. In the end there could be new laws which effect [sic] us all. So for those responsible for the attacks and creating this mess….you dun goofed. I expect a lot of backlash to come out of this.”

If LaBrocca appears steamed from this turn of events, it’s probably with good reason: He stands to lose a fair amount of regular income by banning some of the most lucrative businesses on his forum. Vendors on Hackforums pay fees as high as $25 apiece to achieve a status that allows them to post new sales threads, and banner ads on the forum can run up to $200 per week. 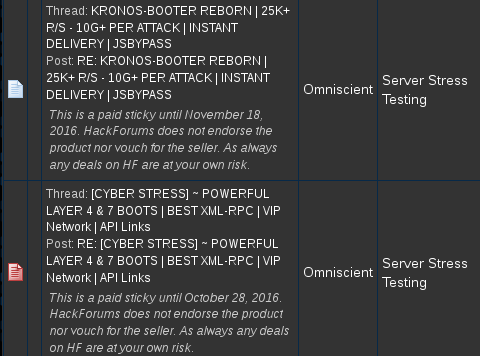 Vendors who wish to “sticky” their ads — that is, pay to keep the ads displayed prominently near or at the top of a given discussion subforum — pay LaBrocca up to $60 per week for the prime sticky spots. And there were dozens of booter services advertised on Hackforums.

Allison Nixon, director of security research at Flashpoint and an expert on booter services, said the move could put many booter services out of business.

Nixon said the average booter service customer uses the attack services to settle grudges with opponents in online games, and that the closure of the SST subforum may make these services less attractive to those individuals.

“There is probably a lesser likelihood that the average gamer will see these services and think that it’s an okay idea to purchase them,” Nixon said. “The ease of access to these booters services makes people think it’s okay to use them. In gaming circles, for example, people will often use them to DDoS one another and not realize they might be shutting down an innocent person’s network. Recognizing that this is criminal activity on the same level of criminal hacking and fraud may discourage people from using these services, meaning the casual actor may be less likely to buy a booter subscription and launch DDoS attacks.”

Although the closure of the SST subforum could put many booter services out of business, the action almost seems somewhat arbitrary given the sheer amount of other illegal hacking activity that is blatantly advertised on Hackforums, Nixon said.

“It’s interesting the norms that are on this forum because they’re so different from how you or I would recognize acceptable behavior,” she said. “For example, most people would think it’s not acceptable to see booter services advertised alongside remote access Trojans, malware crypting services and botnets.”

Other questionable services and subsections advertised on Hackforums include those intended for the sale of hacked social media and e-commerce accounts. More shocking are the dozens of threads wherein Hackforums members advertise the sale of “girl slaves,” essentially access to hacked computers belonging to teenage girls who can be extorted and exploited for payment or naked pictures. It’s worth noting that the youth who was arrested for snapping nude pictures of Miss Teen USA Cassidy Wolf through her webcam was a regular user of Hackforums.

Hackforums users advertising the sale and procurement of “girl slaves.”

Nixon said most Hackforums users are essentially good people who are interested in learning more about technology, security and other topics. But she said many of the younger, impressionable members are heavily influenced by some of the more senior forum participants, a number of whom are peddling dangerous products and services.

“Most of the stuff on Hackforuns is not that bad,” Nixon said. “There are a lot of kids who are pretty much normal people and interested in hacking and technology. But there are also gangs, and there are definitely criminal organizations that have a presence on the forum that will try to enable criminal activity and take advantage of people.”

The removal of booter services from Hackforums is a gratifying development for me personally and professionally. My site has been under near-constant attack from users of these booter services for several years now. As a result, I have sought to bring more public attention to these crooked businesses and to the young men who’ve earned handsome profits operating over the years. Here are just a few of those stories:

Are the Days of Booter Services Numbered?

Spreading the DDoS Disease and Selling the Cure