Nineteen years ago this week I registered the domain taosecurity.com:
Creation Date: 2000-07-04T02:20:16Z
This was 2 1/2 years before I started blogging, so I don't have much information from that era. I did create the first taosecurity.com Web site shortly thereafter.
I first started hosting it on space provided by my then-ISP, Road Runner of San Antonio, TX. According to archive.org, it looked like this in February 2002.

That is some fine-looking vintage hand-crafted HTML. Because I lived in Texas I apparently reached for the desert theme with the light tan background. Unfortunately I didn't have the "under construction" gif working for me.
As I got deeper into the security scene, I decided to simplify and adopt a dark look. By this time I had left Texas and was in the DC area, working for Foundstone. According to archive.org, the site look like this in April 2003.

Notice I've replaced the oh-so-cool picture of me doing American Kenpo in the upper-left-hand corner with the classic Bruce Lee photo from the cover of The Tao of Jeet Kune Do. This version marks the first appearance of my classic TaoSecurity logo.
A little more than two years later, I decided to pursue TaoSecurity as an independent consultant. To launch my services, I painstakingly created more hand-written HTML and graphics to deliver this beauty. According to archive.org, the site looked like this in May 2005. 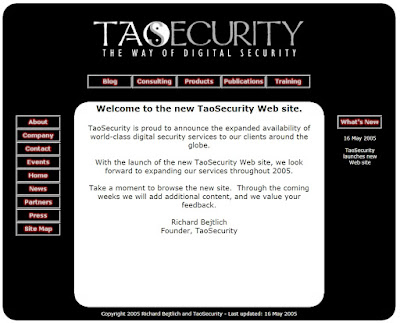 I mean, can you even believe how gorgeous that site is? Look at the subdued gray TaoSecurity logo, the red-highlighted menu boxes, etc. I should have kept that site forever.
We know that's not what happened, because that wonder of a Web site only lasted about a year. Still to this day not really understanding how to use CSS, I used a free online template by Andreas Viklund to create a new site. According to archive.org, the site appeared in this form in July 2006. 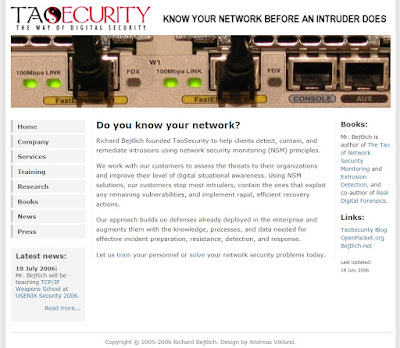 After four versions in four years, my primary Web site stayed that way... for thirteen years. Oh, I modified the content, SSH'ing into the server hosted by my friend Phil Hagen, manually editing the HTML using vi (and careful not to touch the CSS).
Then, I attended AWS re:inforce the last week in June, 2019. I decided that although I had tinkered with Amazon Web Services as early as 2010, and was keeping an eye on it as early as 2008, I had never hosted any meaningful workloads there. A migration of my primary Web site to AWS seemed like a good way to learn a bit more about AWS and an excuse to replace my teenage Web layout with something that rendered a bit better on a mobile device.
After working with Mobirise, AWS S3, AWS Cloudfront, AWS Certificate Manager, AWS Route 53, my previous domain name servers, and my domain registrar, I'm happy to say I have a new TaoSecurity.com Web site. The front page like this:

The background is an image of Milnet from the late 1990s. I apologize for the giant logo in the upper left. It should be replaced by a resized version later today when the AWS Cloudfront cache expires.
Scolling down provides information on my books, which I figured is what most people who visit the site care about.

For reference, I moved the content (which I haven't been updated) about news, press, and research to individual TaoSecurity Blog posts.
It's possible you will not see the site, if your DNS servers have the old IP addresses cached. That should all expire no later than tomorrow afternoon, I imagine.
Let's see if the new site lasts another thirteen years?
Copyright 2003-2020 Richard Bejtlich and TaoSecurity (taosecurity.blogspot.com and www.taosecurity.com)