When Blackbird Tech, a notorious patent troll, sued us earlier this year for patent infringement, we discovered quickly that the folks at Blackbird were engaged in what appeared to be the broad and unsubstantiated assertion of patents -- filing about 115 lawsuits in less than 3 years, and have not yet won a single one of those cases on the merits in court. Cloudflare felt an appropriate response would be to review all of Blackbird Tech’s patents, not just the one it asserted against Cloudflare, to determine if they are invalid or should be limited in scope. We enlisted your help in this endeavor by placing a $50,000 bounty on prior art that proves the Blackbird Tech patents are invalid or overbroad, an effort we dubbed Project Jengo.

Since its inception, Project Jengo has doubled in size and provided us with a good amount of high quality prior art submissions. We have received more than 230 submissions so far, and have only just begun to scratch the surface. We have already come across a number of standouts that appear to be strong contenders for invalidating many of the Blackbird Tech patents. This means it is time for us to launch the first formal challenge against a Blackbird patent (besides our own), AND distribute the first round of the bounty to 15 recipients totaling $7,500.

We’re just warming up. We provide information below on how you can identify the next set of patents to challenge, help us find prior art to invalidate those targets, and collect a bit of the bounty for yourselves.

We wrote previously about the avenues available to challenge patents short of the remarkable cost and delay of federal court litigation; the exact cost and delay that some Blackbird targets are looking to avoid through settlement. Specifically, we explained the process of challenging patents through inter partes review (“IPR”) and ex parte reexamination (“EPR”).

Based on the stellar Prior Art submissions, we have identified the first challenge against a Blackbird patent.

The patent, which has a priority date of October 28, 1999, describes in broad and generic terms “[a]n integrated system comprising the Global Positioning System and the Internet wherein the integrated system can identify the precise geographic location of both sender and receiver communicating computer terminals.” It is not hard to imagine that such a broadly-worded patent could potentially be applied against a massive range of tech products that involve any GPS functionality. The alarmingly simplistic description of the patented innovation is confirmed by the only image submitted in support of the patent application, which shows only two desktop computers, a hovering satellite, and a triangle of dotted lines connecting the three items.

Blackbird filed suit in July 2016 against six companies asserting this ‘448 patent. All of those cases were voluntarily dismissed by Blackbird within three months -- fitting a pattern where Blackbird was only looking for small settlements from defendants who sought to avoid the costs and delays of litigation. A successful challenge that invalidates or limits the scope of this patent could put an end to such practices.

Project Jengo’s Discovery - The patent claims priority to a provisional application filed October 28, 1999, but Project Jengo participants sourced four different submissions that raise serious questions about the novelty of the ‘448 patent when it was filed:

Project Jengo participants who provided these submissions will each be given an award of $500!

What we plan to do -- Because this patent is written (and illustrated) in such broad terms, Blackbird has shown a willingness to sue under this patent, and Project Jengo has uncovered significant prior art, we think this case provides a promising basis to challenge the ‘448 patent. We are preparing an ex parte reexamination of the ‘448 patent, which we expect to file with the US Patent and Trademark Office in October. Again, you can read about an ex parte challenge here. We expect that after review, the USPTO will invalidate the patent. Although future challenges may be funded through crowdsourcing or other efforts, we will be able to fund this challenge fully through funds already set aside for Project Jengo, even though this patent doesn’t implicate Cloudflare’s services.

Project Jengo participants have also done an incredible job identifying relevant prior art on the patent asserted against Cloudflare by Blackbird Tech. Blackbird claims that the patent describes a system for monitoring an existing data channel and inserting error pages when transmission rates fall below a certain level. We received a great number of submissions on that patent and are continuing our analysis.

Cloudflare recently filed a brief with the U.S. District Court in which we pointed to eleven pieces of prior art submitted by Jengo participants that we expect will support invalidity in the litigation:

Bounty hunters who first submitted this prior art that was already used in the case will each receive $500. The Project Jengo Team at Cloudflare is continuing analysis of all the prior art submissions, and we still need your help! The litigation is ongoing and we will continue to provide a bounty to prior art submissions that are used to invalidate the Blackbird patents.

The Search Goes On… with new armor 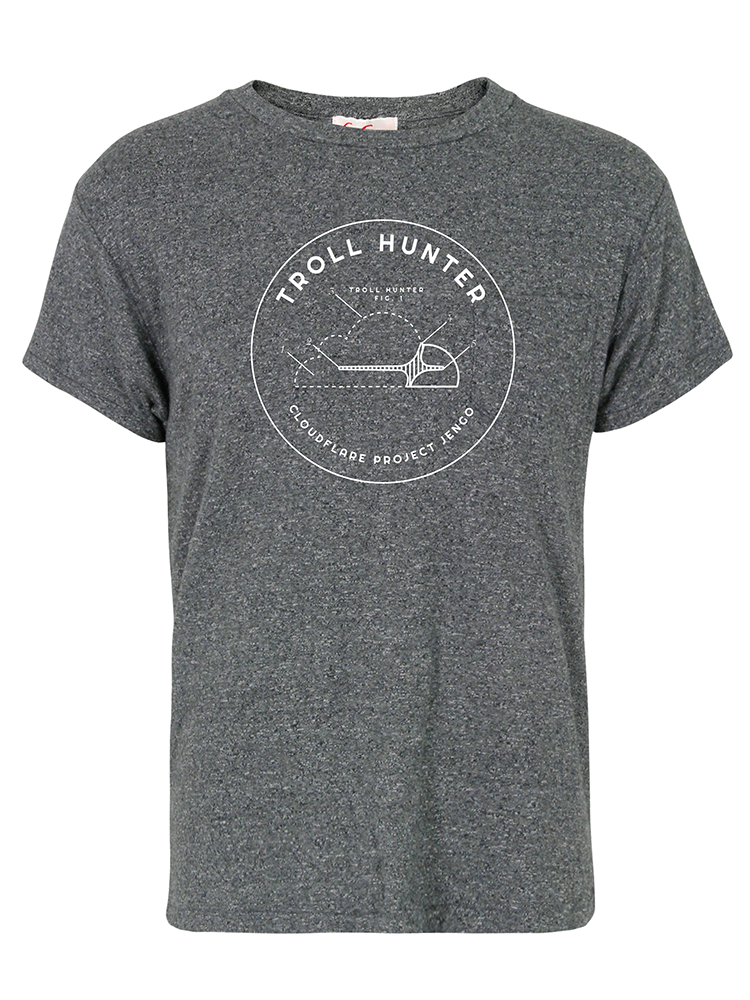 Even if you didn’t receive a cash award (yet), our t-shirts are about to hit the streets! Everyone who submitted prior art to Project Jengo will be receiving a t-shirt. If you previously made a submission, we’ve emailed you instructions for ordering your shirt. This offer will remain open for the duration of Project Jengo for anyone that submits new prior art on any of the Blackbird patents. Enjoy your new armor!

We know Blackbird’s “new model” is dangerous to innovation and merits scrutiny, so we previously lodged ethics complaints against Blackbird Tech with the bar disciplinary committees in Massachusetts and Illinois. This week, we sent an additional letter to the USPTO’s Office of Enrollment and Discipline asking them to look into possible violations of the USPTO Rules of Professional Conduct. As with the other jurisdictions, the USPTO Rules of Professional Conduct prohibit attorneys from acquiring a proprietary interest in the lawsuit (Rule §11.108(i)), sharing fees or equity with non-lawyers (Rules 11.504(a) and 11.504(d). Blackbird’s “new model” seems to violate these ethical standards.

Getting the word out
Cloudflare’s Project Jengo continues to drive conversation about the corrosive problem of patent trolls. Since our last blog update, our efforts have continued to draw attention in the press. For the latest, you can see...

“The hunted becomes the hunter: How Cloudflare’s fight with a ‘patent troll’ could alter the game,” -- TechCrunch

“This 32-year-old state senator is trying to get patent trolls out of Massachusetts,” -- TechCrunch

III. A Progress Report on Challenges to the Blackbird Patents

As you continue your search for prior art as part of Project Jengo, we’ve updated our chart of Blackbird patents, and identified a number of new patents and applications we’ve found that Blackbird has acquired.

As reflected on the chart (in red), so far 5 of the patents are being challenged or have been invalidated. In addition to our pending challenge of the ‘448 patent:

In the charts below, we’ve highlighted 11 Blackbird patents (in green) that seem ripe for challenge -- based on a combination of the fact that they seem broadly applicable to important industries, may have already been the basis of a Blackbird lawsuit, and/or already have some valuable prior art sourced through Project Jengo. We’ll take submissions on any Blackbird patent, but these are the patents we’re focused on and should get extra attention from Project Jengo participants seeking a bounty.

After our review is a bit further down the road, we’ll make all the prior art we’ve received on these patents available to the public so that anyone facing a challenge from Blackbird can defend themselves. We hope to have that information posted by the end of October.

And finally, Cloudflare is funding the first ex parte challenge fully out of funds it has set aside or had donated to Project Jengo. Should any of these patents hit home for you, and you are interested in supporting this fight financially, please reach out to [email protected].