Earlier this week, various macOS sysadmins began reporting that some Apple devices were failing to upgrade to Big Sur version 11.1. Affected users may briefly see the 11.1 upgrade, but then it disappears from the update UI and from the command line softwareupdate tool despite not having been installed.

Developer Victor Vrantchan, of the open source MicroMDM project, says he’s found the problem. Some Macs are erroneously requesting 11.0.1 instead of 11.1 from Apple’s update server—which update is then rejected if the machine in question is already running 11.0.1 or newer, as most such are. 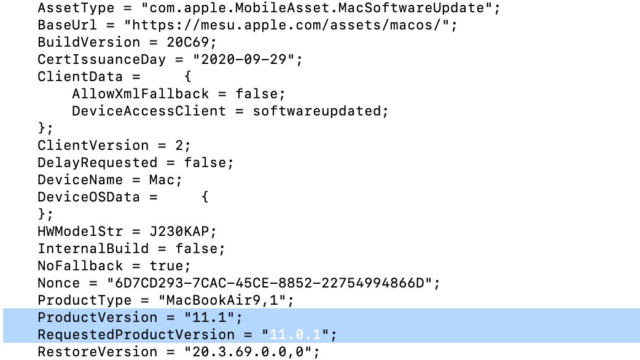 Apple’s update servers don’t like it when you ask for a system update that’s older than your currently installed version. (credit: Victor Vrantchan)

While the erroneous requests themselves are clear enough, the breaking condition is less so. According to Vrantchan, making the erroneous request “somehow corrupts the state of the software update process,” resulting in a system that no longer presents the update as an option in System Preferences at all.