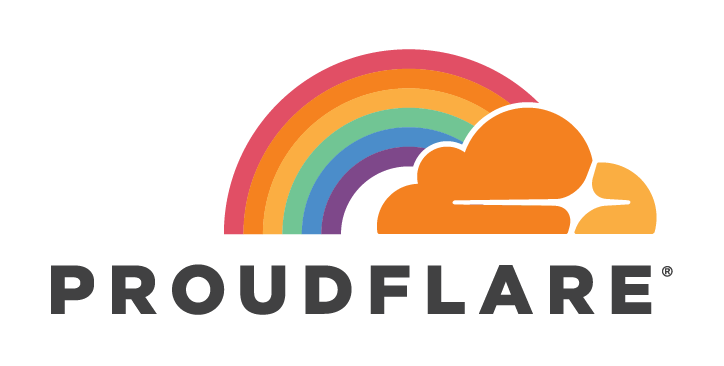 Happy Pride from Proudflare, Cloudflare’s LGBTQIA+ employee resource group. We wanted to share some stories from our members this month which highlight both the struggles behind the LGBTQIA+ rights movement and its successes. This first story is from Lesley.

The moment that crystalised the memory of that day…crystal blue afternoon, bright-coloured autumn leaves, borrowed tables, crockery and cutlery, flowers arranged by a cousin, cake baked by a neighbour, music mixed by a friend... our priest/rabbi a close gay friend with neither  yarmulke nor collar. The venue, a backyard kitty-corner at the home my wife grew up in. Love and good wishes in abundance from a community that supports us and our union. And in the middle of all that, my wife… turning to me and smiling, grass stains on the bottom of her long cream wedding dress after abandoning her heels and dancing barefoot in the grass. As usual, a microphone in hand, bringing life and laughter to all with her charismatic quips.

Our first marriage was as legal as marrying two donkeys, with all the attached rights

This was the fall of 2002 and same-sex marriage was legal in 0 of the 50 United States.

It was a tough time economically. We had a front row seat to the historic internet boom and bust. My company filed chapter 11 bankruptcy and my customer’s customers were going out of business. I did not anticipate getting a job anytime soon. So after a lot of silver-tongued persuading, I convinced my wife to quit her job, rent out our home, buy a RV. We grabbed our two Australian shepherds and toured the US for a nine-month honeymoon. Forty-five states and 36,000 miles later, we still had some funds left over and I wanted to show Robin my other home, so we travelled to South Africa for 6 weeks. Just before we got on our flight back to the US, we heard news from our family that Gavin Newsom, the then mayor of San Francisco was going to declare same-sex marriage legal and begin issuing marriage licenses in San Francisco. The trip back to the Bay Area took 42 hours door-to-door and had a nine-hour time change. We got home, dropped off our bags and the very next morning, completely jet-lagged, went back into the city to stand in line to get our marriage license.

Our second marriage was a much smaller and more intimate affair

Held in an alcove in the beautiful San Francisco City Hall rotunda with its exquisite architectural design and a view of the grand staircase. It was attended by Robin’s parents and a couple of our close friends that could take the time at such short notice. Knowing that the time window was closing, we grabbed the opportunity to have our marriage recognised legally along with dozens of other jubilant gay couples.

Alas, a short time later, we received an annulment in the mail. We received that, along with an apology and a request that we donate the licensing fees to the city. We were disappointed, but felt our love was strong enough to carry us through and who needed a piece of paper anyway, right?!?

Our attitude changed significantly when we had our son. We had been trying for a while and what finally worked for us was to take my egg along with a sperm bank donation, and impregnate Robin. To this day, my mom says I’m the best delegator she knows. I delegated childbirth. I also delegated all my rights as Joey’s mother. Absent a marriage, in California, the birth mother has all the rights and responsibilities.

Robin had been in a relationship before me where she had planned and had a child with another woman. When they split up, Robin had no rights to see or have access to the child. She also had no obligation to support the child in any way, financial or other.

We wanted to make sure Joey never faced that predicament and without the option for marriage, took the next available avenue. I adopted Joey. Even though he is genetically my child, we had to go through a lengthy and costly procedure to adopt him. We had child protective services inspect our home and come for numerous visits to ensure I would be a “suitable” parent for my child. Eventually, I was granted adoption approval and we went to family court in Martinez where I came before a judge and officially adopted Joey as my son.

In the early summer of 2008, the California Supreme Court declared same-sex marriage legal in California. We were the second state to make it legal after Massachusetts. The court found that barring same-sex couples from marriage violated California State’s Constitution.

In the period between the declaration and Prop 8 passing, Robin and I joined 18,000 gay couples that tied the knot.

At this point, we were pros at getting married and went with casual jeans and white cotton shirts, which was easier for everyone including our son who attended our wedding. This was the first marriage where our legal rights and responsibilities actually stuck. These rights were only valid in California however, so on any travel outside of our beautiful state our union would be considered illegitimate. From a tax perspective, it was a real adventure with every advisor having a different take on the way we should file our taxes. Federally our marriage was not recognized, but in California it was. This lead to a lot of confusion and added expenses every April.

Little did we know the backlash that our happy/gay marriages would cause. The religious, conservative right came back at us with Prop 8 for daring to expect equality.

From our perspective, there was no other way to view this than vengeful and born out of malice for gays. Why would these people care that we wanted to live together and have the protections of marriage? I saw this as a group of people wanting to impose their religion and view of what a marriage should be on us. We were on vacation in Hawaii when the election results were announced, sweet with Barack Obama being elected and so, so very bitter with Prop 8 passing.

Prop 8 provoked a lot of soul-searching for me. I was very angry and had a general distrust of people that I had never felt before. I would be in the supermarket line and wonder who there may or may not have voted against my marriage. It was deeply personal and hurtful. We had Mormon friends, who are for the most part wonderful and whose company we enjoyed. Knowing the extreme measures their community went to to ensure Prop 8 passed, cut me deeply.  Catholics and conservatives who are both family and friends, went out of their way to harm me and my family and to make our lives more difficult because they believed we were sinners and not worthy of equality in the eyes of the law. Fortunately, our marriage was grandfathered in, so our rights in California were preserved.

The one ray of light was watching our allies stand up and come to our defense. In my life, I’ve pretty much always been part of the privileged class. I’m a white woman with a degree who grew up in an affluent home. I had never personally experienced discrimination or felt part of a marginalized minority. To have allies that stepped up and argued on our behalf brought tears to my eyes. We would not have the rights we have today without those allies. This was a significant lesson for me to learn. I will always stand up for the disenfranchised and make my voice heard to defend those who cannot defend themselves as others have done for me and my family. I know how much it means.

Life went on, and the fight went on, gathering momentum as more states legalized same sex marriage initially through court action and then through popular vote.

We celebrated a landmark victory for gay rights as the U.S. Supreme Court ruled that same-sex marriage was a constitutional right and DOMA (the Defense of Marriage Act) was repealed. Finally, our marriage was recognised in every state in the Union.

We still consider our first wedding as the day we got married. We wrote our own vows and they have traveled with us from home to home framed with pride on the wall in our bedroom.

In October this year, Robin and I will celebrate our 17th wedding anniversary. We’ve been together 19 years in total and it’s been quite a ride. I promised Robin I’d marry her seven times, we still have a way to go!