Skip to content
Posted by Josh Armour, Security Program Manager
We’re thrilled to be joining the security research community at Nullcon this week in Goa, India. This is a hugely important event for the Google Vulnerability Rewards Program and for our work with the security research community, more broadly. To mark the occasion, we wanted to share a few updates about the VRP.
Tougher bugs, bigger rewards
Since the launch of our program in 2010, Google has offered a range of rewards: from $100 USD for low severity issues, up to $20,000 USD for critical vulnerabilities in our web properties (see Android and Chrome rewards). But, because high severity vulnerabilities have become harder to identify over the years, researchers have needed more time to find them. We want to demonstrate our appreciation for the significant time researchers dedicate to our program, and so we’re making some changes to our VRP.

Also, we are now donating rewards attributed to reports generated from our internal web security scanner; we have donated over $8000 to rescue.org this year so far. Cloud Security Scanner allows App Engine customers to utilize a version of the same tool.
Growing the security research community in India
In 2016’s VRP Year in Review, we featured Jasminder Pal Singh, a longtime contributor who uses rewards to fund his startup, Jasminder Web Services Point. He’s emblematic of the vibrant and fast-growing computer security research community in India. We saw that new momentum reflected in last year’s VRP data: India was surpassed only by two other locations in terms of total individual researchers paid. We received reports from ~40% more Indian researchers (as compared to 2015) and gave out 30% more rewards which almost tripled the total, and doubled the average payout (both per researcher and per reward). We are excited to see this growth as all users of Google’s products benefit. 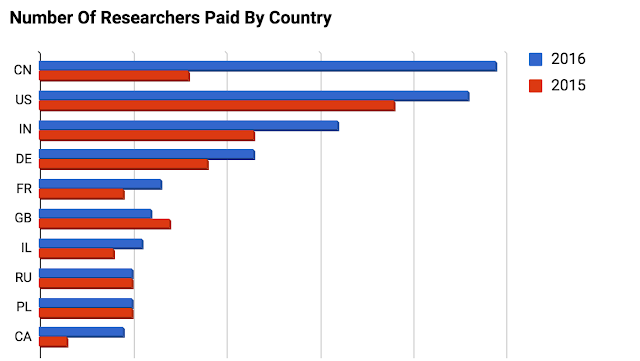 Globally, we’ve noticed other interesting trends. Russia has consistently occupied a position in the top 10 every year the last 7 years. We have noticed a 3X increase in reports from Asia, making up 70% of the Android Security Rewards for 2016. We have seen increases in the number of researchers reporting valid bugs from Germany (27%), and France (44%). France broke into our top 5 countries in 2016 for the first time. 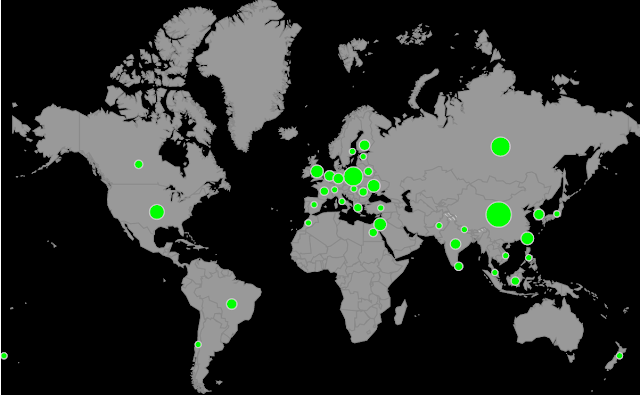 In 2016, we delivered technical talks along with educational trainings to an audience of enthusiastic security professionals in Goa at the Nullcon security conference. This year, we continue our investment at Nullcon to deliver content focused on the growing group of bug hunters we see in India. If you are attending Nullcon please stop by and say “Hello”!